My "Mystery Quilt" #5 - the outer border

As I said before, I have a tendency to cut too many pieces when I am using my Accuquilt cutter, so it isn't surprising that I found myself with quite a few extra half square triangles. Instead of putting them in a small zip-lock bag and putting them away (with good intentions of using them some day - which I admittedly NEVER do) I decided to use them to make some blocks to put in my outer border. I was a little worried that the dark brown would be too much for the quilt, but by breaking it up with some pieced blocks, I thought it would integrate it into the quilt top more effectively. I had to cut a few more half square triangles of some similar fabrics in order to make a total of ten blocks, but I used up ALL of the leftovers that had initially been cut. 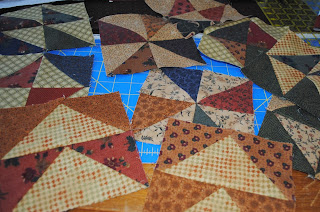 I was going to make all of the blocks the same, but had four flying geese units left over, so I made two 6" blocks with them and used the half square triangles to make an assortment of different blocks for the borders. 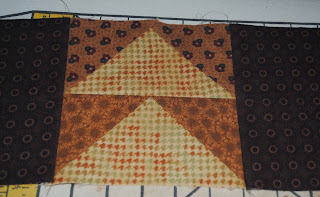 I cut my brown fabric into 6 1/2" strips and spaced the blocks along all four borders and put one in each corner.


Posted by Christine Baker at 6:56 PM