The actual battle that was re-enacted on Saturday afternoon was not the Battle of Chrysler farm, but instead a battle that was fought near Niagara Falls later that year. For the entire battle we had a very knowledgeable commentator from the Friends of Chrysler Farm group, give the "play-by-play". To start the battle, the British and Canadian army marched onto the field.

After many tense minutes of cannon and rifle fire, the air was thick with smoke. 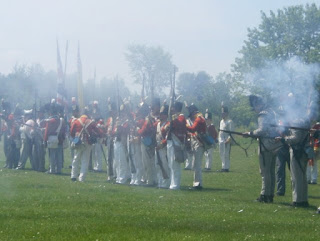 After many casualties, the British commanding officer approaches the centre of the field to ask for a ceasefire.

We really enjoyed watching the battle and would like to thank all of the dedicated volunteers that made the day so exciting AND educational!!
Posted by Christine Baker at 8:37 PM