I had four blocks left over from my disappearing nine patch quilt so, of course, I saved them and wanted to use them for another project.

Unfortunately, none of the ways I arranged the blocks looked right. 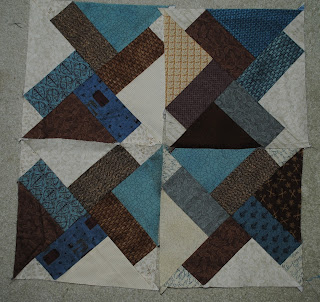 So I decided to cut up each of the blocks to see what I could do with them. I cut the block in half from top to bottom and from side to side.

Next, I rotated each of the sections and rearranged them until I liked the way the block looked.
I sewed the four blocks together with navy blue sashing strips and then added a blue border. I just LOVE this method of making a complex block from a nine patch block. Making the nine patch disappear TWICE was a great way to make the blocks look different for the table runner.

To quilt the table runner I used an alternating swirl design for the outer border and a meander on all of the blocks. Fast, simple and effective.


My disappearing twice nine patch table runner is project #23 in my 52 week UFO Challenge. It has been 16 weeks since I started my challenge and I can't believe how many projects I have been able to finish up!!


Posted by Christine Baker at 5:30 AM