Our Excellent Adventure - Part 4 - The Beach 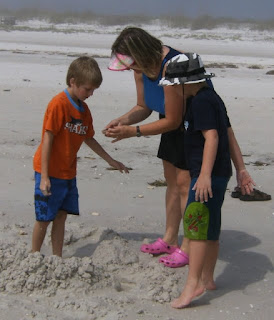 Our timeshare in Crystal Beach was just a short drive away from some great beaches. The first one we went to was on an island connected to the mainland by a causeway. It was so foggy that day, that you could barely see boats passing by, but we all managed to get sunburns anyway. 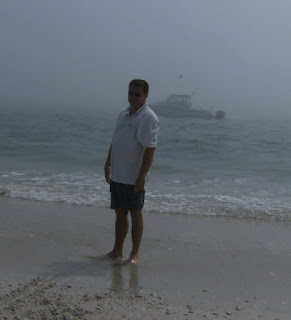 We found some awesome shells and made friends with a passing pelican. There were signs everywhere to watch out for riptides, and the water was still quite cold, so we just took off our shoes and waded along the shore. 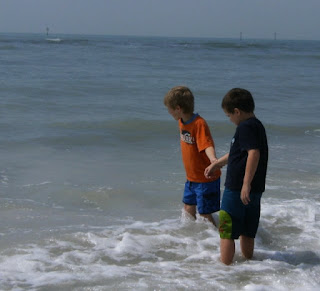 A few days later Mom and Dad took the boys and I to another great beach just north of where we were staying. Here we used makeshift shovels and buckets (margarine containers and a cut-off milk jug) to build a sandcastle. 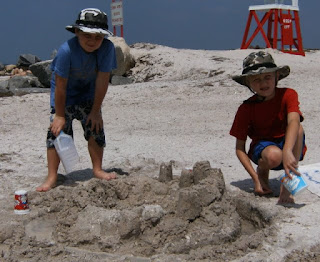 Posted by Christine Baker at 5:51 AM No comments:

Ever since my oldest son, Aidan, was able to hold a crayon, I have been encouraging him to "create". We would paint and draw, play with play-dough and make crafts, but he never seemed all that interested. His younger brother, Carson, has always been more apt to want to colour, cut paper and glue sparkles onto anything he could reach. So when Carson's teacher mentioned to me that she had noticed lately how creative he had become I was very pleased, but not totally surprised. I thought to myself "I'm glad one of my children inherited my creative gene!!"
When I was young, I was always making something. Crochet, knitting, sewing, drawing and painting were all things I loved to do, but I also spent many, many hours playing LEGO with my younger brother. Aidan is obsessed with LEGO. Tonight, as he and Carson built, I was given the job of hunting down some much needed basic blocks to finish their detailed rebel fort. As I dug through our huge bin of assorted LEGO, I pondered to myself just how much money we had invested in all of those little plastic pieces. I wondered how I could have ever been convinced to buy even MORE LEGO when we were on vacation last week. But as I dug, I listened to Aidan describing to Carson how they would build their creation and I realized that maybe Aidan hadn't missed my creative gene after all, maybe he was just expressing it differently. Aidan's LEGO creations are magnificent and he covets new LEGO sets just like I covet new fabric. He reads and rereads the LEGO magazine just like I read my quilting magazines. He builds, tears down and rebuilds his buildings, spaceships, alien landscapes etc, until they are just right - just like I do with blocks on my design wall. It occurred to me tonight that Aidan's colourful pieces of LEGO are his art supplies and his creations are just as creative as anything made with paper, fabric, paint or thread! I just wish those little blocks didn't hurt so much when you step on them!!
Posted by Christine Baker at 5:49 PM No comments:

Email ThisBlogThis!Share to TwitterShare to FacebookShare to Pinterest
Labels: lego

After leaving Orlando, we spent a few days in Avon Park visiting my parents and my aunt, then we headed over to Chrystal Beach, just north of Dunedin, to spend the week at Sutherland Crossing (a timeshare property). The units were very nice - each had three bedrooms and two bathrooms and all of them were very secluded. 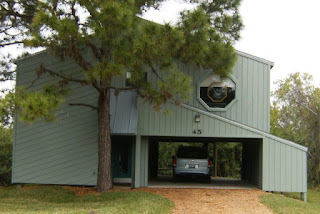 The kids enjoyed the pool and hot tub and Mom and I got to visit "Rainbow's End" quilt shop in Dunedin. 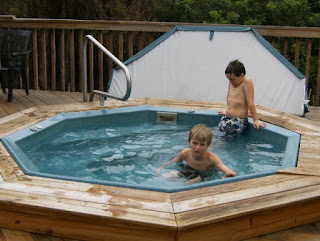 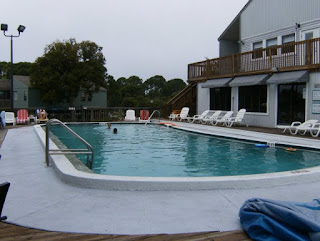 The fishing pier seemed to go on forever. Aidan chased the seagulls and pelicans away, while Carson saw a stingray swimming right underneath him! 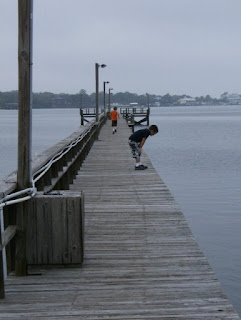 Posted by Christine Baker at 1:53 PM No comments: 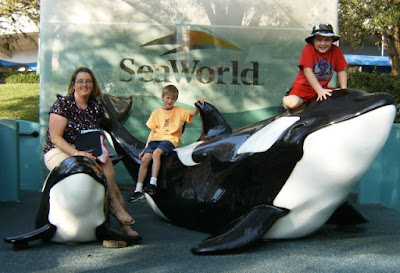 Once we got to Florida, we headed to Orlando and our first stop there was Seaworld. My Boys, Aidan and Carson are both obsessed with manatees - so much so that we had (until this trip) 5 different stuffed animal manatees. I on the other hand, I love dolphins, so the highlight of my trip was feeding and petting the dolphins at Seaworld. 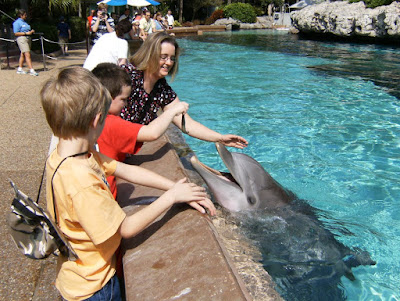 The boys loved Shamu and during the Shamu "Believe" show we had great seats right near the front - in the "Soak Zone". Luckily we remembered to bring a towel to shelter us! Afterwards we headed to the back of the aquarium for the underwater viewing. 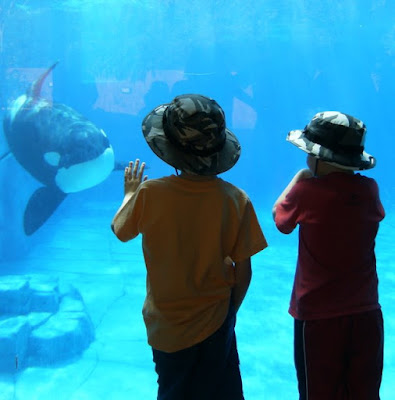 Posted by Christine Baker at 7:16 AM No comments:

On the 8th of March we left Canada to head to Florida for our March Break vacation. We were supposed to leave on the Saturday, but since a huge storm was due to hit that morning, we left a day early. We were booked to take the Amtrak Auto Train on the 10th, but since we arrived in Pennsylvania a day early, we decided to use that time to explore Gettysburg, a place my husband has always wanted to visit. It's a lovely little town and we would love to go back during the summer to see the re-enactors!

The next day, we headed to Lorton to catch the train. We have travelled back and forth to Florida on the Auto Train at least six times now and would highly recommend it for family's with young children who don't like to fly (like my husband) or anyone who would like to try something new. We always get the family bedroom, which sleeps four. The train leaves at 4:00pm, you get supper and breakfast in the dining car, movies in the lounge car and arrive in Florida at Sanford station the next morning around 8:30. 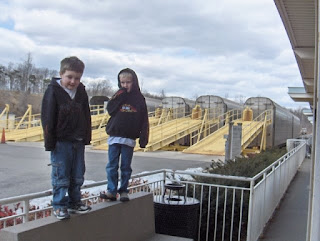 Carson and Aidan waiting for the workers to start loading the vehicles onto the train. Due to the number of rail cars that are used to carry the vehicles, the Auto Train is the longest passenger train in the world. 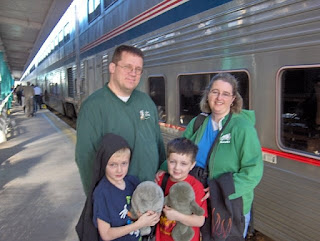 Waiting to board at the Lorton Station. The boys are holding Misty and Molly - two of their toy Manatees. 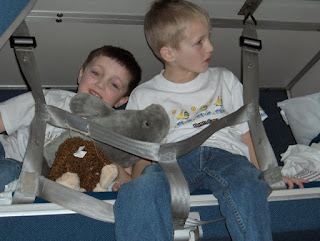 The boys LOVE the top bunk! The strapping is hooked up to the ceiling so that you don't roll out in the middle of the night.
Posted by Christine Baker at 5:57 AM No comments:

For months I had been debating about whether to buy a Grand Quilter sewing machine on a Grace frame. Even though I don't make a lot of large quilts, I desperately wanted one!! I would keep going in to Taylor's Sewing Centre to try out the store model, and one night I took my 9 year old Aidan along. As he watched me trying it out, he looked at me and said "You really want it don't you?" and he was right. When my Great Aunt Catherine passed away and left me some money, with a note in her will that said I should "use it as though I were a single woman" my mind was made up! But, to my dismay, it wouldn't fit in my sewing room!
After Christmas, Mike and I decided that we would build a wall to divide our large living room into two rooms, and that the new room would be my new "studio". We did not have a family room in our house, so my old sewing room would house the mounds of Lego and Playstation games that our boys have collected. While setting up my new room, I consciously arranged things so that there might be space for my new toy - and a couple weeks ago I took the leap and bought it. I have already quilted two twin quilts! One that I made just to have something to quilt and a store model that Donna Taylor let me "practice" on. Both of them turned out great, and the machine is very easy to use - I'm very happy with it! 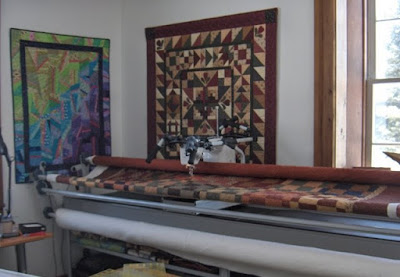