Me and my quilts

It is so satisfying to see a quilt that you made yourself hanging in a quilt show! Here I am with my "Batik Beauty". 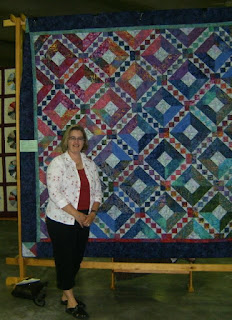 Here is my "Into the deep" quilt which I started in a workshop with Bethany Garner last fall - it was foundation pieced in sections then sewn together and quilted - I add some beading as well along the quilting lines. 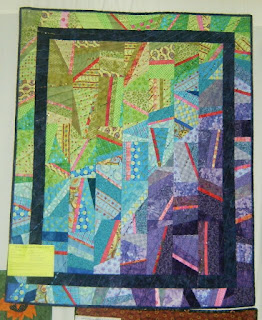 It's also so nice to see quilts in a show that were made by your MOM! Here is her African quilt that she has given to the Kinette Club of Brockville. They are raffling it and another quilt that she has donated to raise funds for a few different causes - one of which is the Chernobyl Quilts group that Mom belongs to. 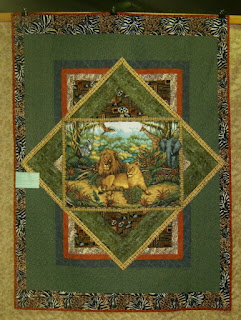 Posted by Christine Baker at 9:25 PM No comments:

Our local guild has some AMAZINGLY talented quilters!! Here are a couple of my favourite quilts from the show, both made and quilted by Tammy Spencer. Tammy has been quilting for a few years now, and a couple of years ago bought a Gammill long arm machine. Since then she has quilted many, many quilts for quilters in this area - I lost count of the ones that she had quilted at the show last weekend! 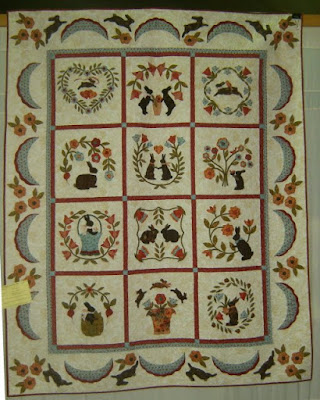 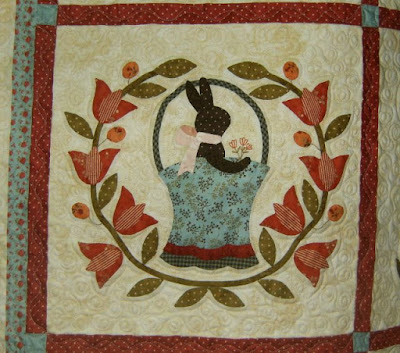 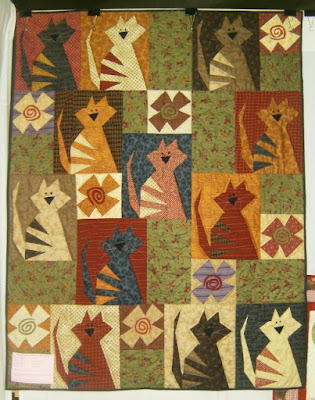 One of the things that I like best about our local guild quilt show is stumbling upon quilts that have been made by my students or ones that have been made from one of my patterns - it is so rewarding to see that my students actually finished their projects and it is so neat to see how someone else interprets one of my patterns. Here are two quilted jackets made by students in my class at Taylor's Sewing Centre last fall: 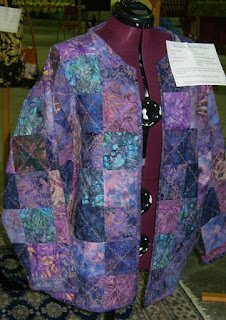 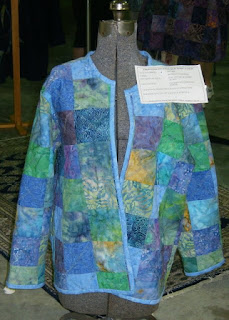 Here are two different versions of the pattern "Barnyard Boogie" that was designed by Nellie and I. Both of these quilts were made by students in her block of the month class at Taylor's: 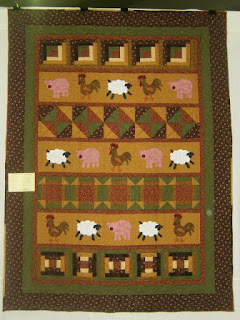 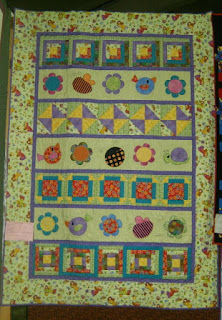 Posted by Christine Baker at 9:12 PM No comments:

I finished my quilt (just in the nick of time) 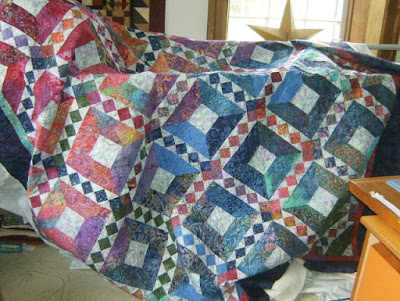 After finishing the quilting on Marilee's black and white quilt, I hastily got to work putting the borders on my batik quilt and mounting it on the frame. By Tuesday morning I had finished the quilting!! I made the binding and sewed it on, then my mom hand took the quilt to her house and stitched the binding to the back. It was all ready to hand in on Wednesday evening for the Thousand Islands Quilter's Guild show on the weekend. Here are some close-ups of the quilting designs that I chose. 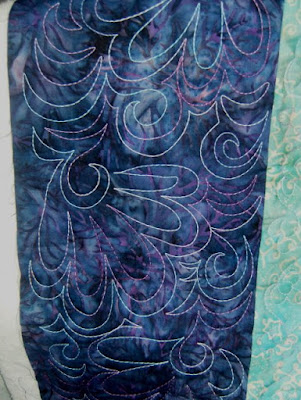 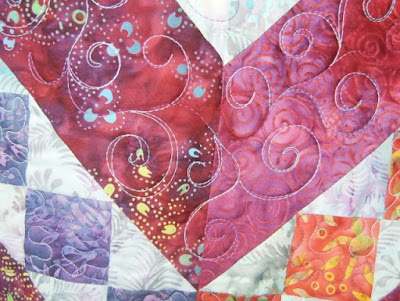 Posted by Christine Baker at 9:06 PM No comments:

Here is the fifth and FINAL Dancing Bugz baby quilt. I think this one is my favourite! I can't wait to give these quilts as baby shower gifts. 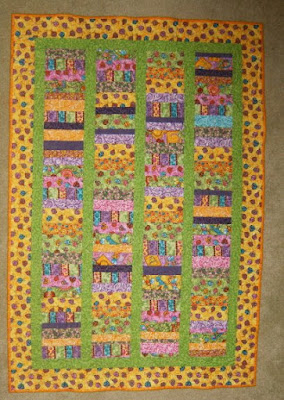 Posted by Christine Baker at 7:41 PM No comments:

Here is the fourth quilt - the large bug blocks were cut from a panel that was part of last year's Dancing Bugz line. 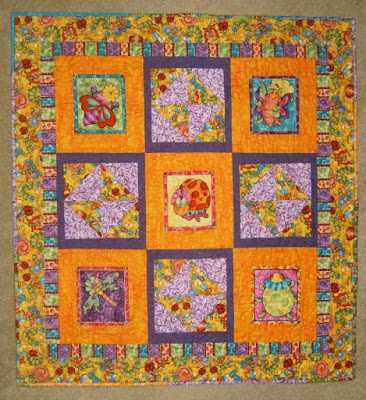 Posted by Christine Baker at 7:39 PM No comments:

Here is the third baby quilt. Don't you just LOVE it when you see a mistake AFTER the quilt is quilted and bound??? Yes, the third row was sewn on upside down. The mainly blue blocks were supposed to be on opposite corners! Oh well, I'm sure the baby won't even notice!!! 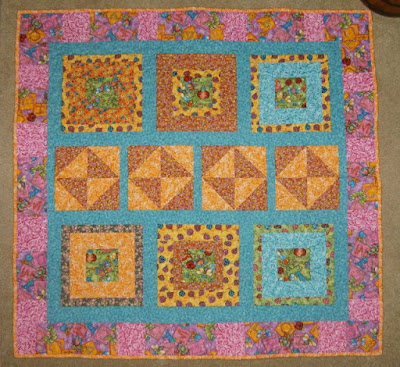 Posted by Christine Baker at 7:36 PM No comments:

The rest of the baby quilts now have their bindings sewn on (thanks Mom!) so here is a picture of the second one that was finished. 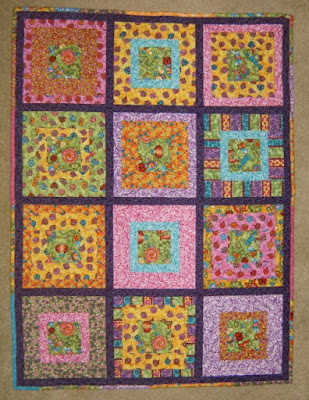 e
Posted by Christine Baker at 7:34 PM No comments:

Take a look at this stunning quilt made by my friend Marilee Taylor. I've never wanted to make a black and white quilt but after quilting this creation for Marilee, now I do! Marilee is now putting the binding on it, as she has entered it into our guild's quilt show on June 19th and 20th. Now I just have to finish my own queen size quilt that I have entered in the show - at least it now has it's outside borders! I have 6 days to get it finished - NO PROBLEM!!!! 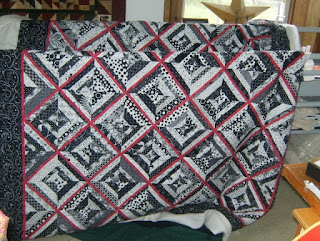 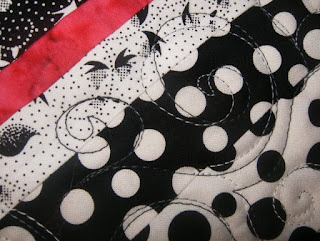 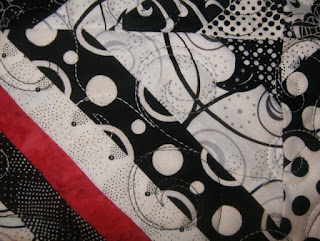 Posted by Christine Baker at 5:51 AM No comments:

An exercise in frustration!!!

Being a quilt pattern designer who publishes her own patterns, I know how important it is to have well written instructions, but apparently not everyone shares this thought! For my birthday/mother's day this year my family bought a beautiful gazebo for our back deck. We started to build this gazebo a few days after my birthday which was on May 10th and just this Saturday (June 6th) we finally finished. Now you may think that we are just not that handy, or that we were busy, but the truth of the matter is that the instructions were so HORRIBLY WRITTEN that we had to walk away from the project many times to save our sanity. Many, many times we would follow the directions only to find that the next step could not be finished as written BECAUSE we had done what we were told to do 3 steps back. So we would undo what we had done in step 2, do what we were supposed to do in step 5, then redo step 2. At one point I was sitting under it and told my husband that I absolutely HATED that gazebo. My father said that our first mistake was to follow the instructions BUT being a pattern writer I think that when you spend that kind of money on a product that you should get quality - in the product itself as well as in the instructions.
Anyway, the gazebo is finished, and lots very nice. I don't hate it anymore, but I now have an even greater appreciation of a set of well written instructions!
Posted by Christine Baker at 5:43 AM No comments:

Both Nellie and I forgot to take any pictures while we were at the CreativFestival this spring - we were TOO BUSY!! So I was very excited when Nellie called this morning to say that there was a picture of me doing a punchneedle demo on the CreativFestival website! 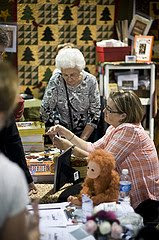 When we made the Dancing Bugs quilt for Camelot we had many test run blocks that didn't make it into the finished quilt - they just didn't seem to work for us. So when Nellie gave me the bag of left over fabric and blocks, I just HAD to do something with them! Mike has two cousins who are expecting babies and one of the other pharmacist`s at work is pregnant, so I went on a baby-quilt-making spree and churned out FIVE of them! Here is number one - it was given to Mike`s cousin Pat and his partner Marci at her baby shower yesterday. Their baby boy is due this month. The rest of the quilts are quilted, but are awaiting their bindings. 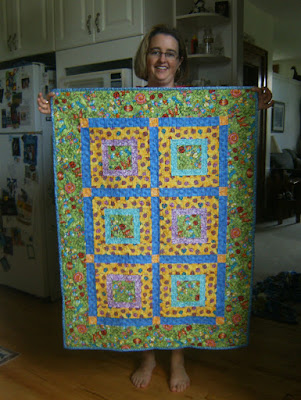